“The notion of edit distance and the efficient algorithm for computing it have obvious applications to problems of spelling correction and may be useful in choosing mutually distant keywords in the design of a programming language.” – R.A. Wagner, M.J. Fischer, MIT, Jan 1974.

Approximate string matching is a fundamental technique of many data analysis algorithms, providing an ability to determine the similarity between various textual data. Mostly, the similarity is numerically represented in terms of distance between two literal strings.

The approximate string matching finds its application in spell checker and word autocomplete features of many existing web and mobile applications, providing the correct word suggestions for word typos or other incorrect user inputs. The full-text search engine of a spell checker computes the distance between the user input and each of the correct strings in its database, finding the most similar words, the distance of which is minimal.

The various classical distance metrics, such as Sørensen’s index and Hamming distance, are applied to determine the similarity of textual data. However, using these metrics eventually leads to incorrect suggestions, caused by the misleading distance between those similar strings computation. Applied to the literal strings, the Hamming distance and other metrics are not aware of common substrings (suffixes) and the adjacent character transpositions, evaluating the largest distance between the most similar strings.

It was proved by Vladimir Levenshtein, in 1965, that it’s possible to evaluate the distance between strings, as the minimal number of such single-character editing operations, required to transform a distorted string into the correct one.  The Levenshtein distance metric was formulated as the Levenshtein automata algorithm. It was used as an alternative to the Hamming codes, for restoring the correct bytes from damaged or distorted binary streams.

The Levenshtein distance is a very popular data analysis algorithm, used for a widespread of applications, completely solving the problem of textual data similarity evaluation, aware of common substrings and adjacent character transpositions.

There is an entire class of algorithms to compute the Levenshtein distance, including two variations of the Wagner-Fischer algorithm, and the Hirschberg algorithm to evaluate the similarity and optimal strings alignment, introduced by D.S. Hirschberg, in 1975.

An optimal Wagner-Fischer (two matrix rows-based) algorithm and its implementation are thoroughly discussed in this article. The code samples in Python demonstrate using the Wagner-Fischer algorithm to compute the Levenshtein distance of various strings, in the University of Michigan’s “An English Word List” dataset (https://www-personal.umich.edu/~jlawler/wordlist.html), consisting of over 60K English words, alphabetically sorted.

The Levenshtein distance is a metric for an effective distance and similarity of two literal strings evaluation. It solely relies on representing the distance as a minimal count of editing operations, made to the first string, transforming it into the second one, rather than the statistics of characters unmatched in both strings.

Obviously, one string is transformed into another string via a series of deletions, insertions, and replacements of characters in the first string. As the result, two dissimilar strings are being transformed by using a large number of edits, and the most similar ones – with the lesser number of such edits, respectively.

The main benefit of the Levenshtein distance is that the similarity of strings is evaluated, observing that both strings might have a common substrings, and thus, the correct distance between such strings is actually smaller than the Hamming or other distances. Also, the Levenshtein distance is evaluated, solely based on obtaining the counts of characters that are to be deleted, inserted, or replaced, without performing the strings transformation, itself.

In the case when, two strings don’t have common substrings (suffixes), the Levenshtein and Hamming distances are the equal. Otherwise, the Levenshtein distance is computed, aware of the common substrings, the positions of which have not been matched in both strings, since it’s only possible to evaluate the distance of such strings as the minimal edits count of their transformation.

The Levenshtein piecewise function has one straightforward implementation in most programming languages, Haskell, Python, etc. However, it incurs the growing recursion depth caused by the distance of the same substrings re-computation, and thus, cannot be effectively used as a computational algorithm.

Similar to the Levenshtein recurrence piecewise function, the Wagner-Fischer algorithm computes the Levenshtein distance, based on the deletion, insertion, and replacement counts of each prefix \(S_1[i]\) into \(S_2[j]\) transformation.

Logically, each of these editing operations are a bit different than usually:

Insertion to S1, Deletion from S2: the insertions of characters to \(S_1\) are made by deleting each of the characters, including the empty prefix ( # ), from the beginning of \(S_2\), and appending it to the end of \(S_1\). The insertion count is the number of characters being inserted to \(S_1\) and deleted from \(S_2\), correspondingly:

The Distance Values Stored In The Matrix M

The Levenshtein distance between strings \(S_1\)=ABCDE and \(S_2\)=NFBC computation yields the distance matrix M of shape \((5\times4)\), shown below: 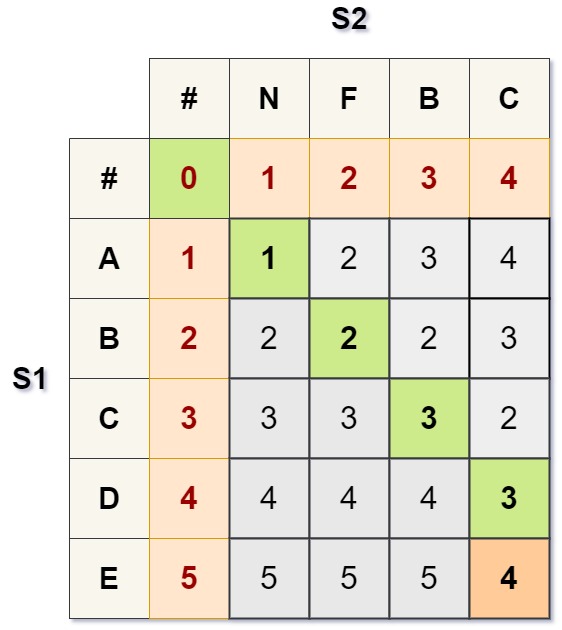 The Wagner-Fischer algorithm solely relies on the observation that the Levenshtein distance bottom-top computation is only possible, in the case when the distances from an “empty” string, \(S_1\) or \(S_2\), to all of the prefixes of another string, are initially provided. Each of these distances is the count of characters that must be deleted from or inserted into an empty string ( # ), \(S_1\) or \(S_2\), transforming it into the \(S_2[j]-\) or \(S_1[i]\)-prefix, correspondingly.

The expression, above, evaluates the distance \(M[i][j]\) of prefixes \(S_1[i]\) and \(S_2[j]\), calculating the minimal of the distances, previously computed for the other prefixes. Each of these distances exactly corresponds to the counts of deletions, insertions, and replacements, made to the \(S_1\) string: 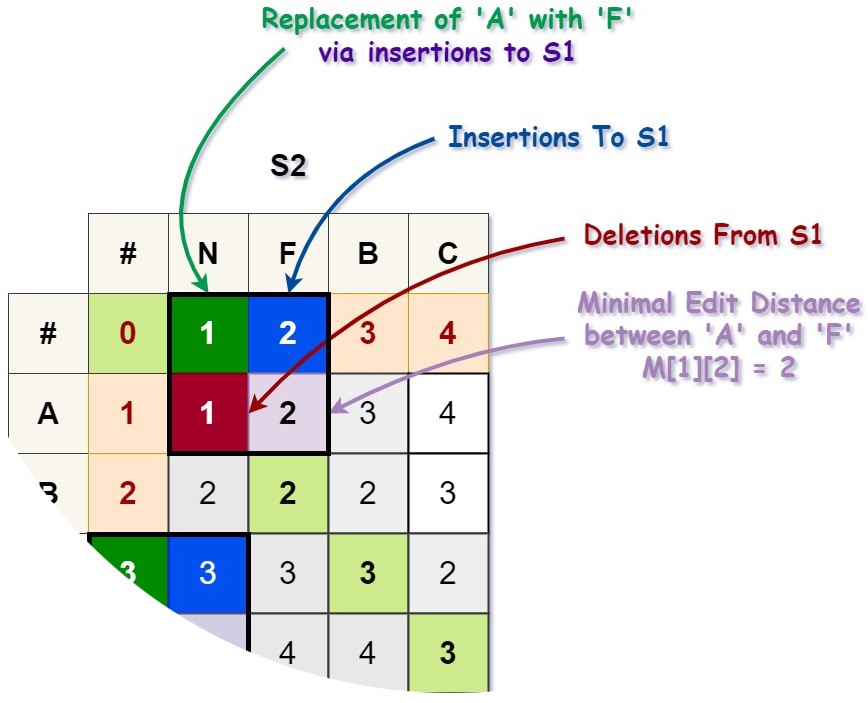 Finally, an average-case complexity and space used by the Wagner-Fischer algorithm are \(\theta(|S_1|\times)\), although more optimal variations of the algorithm exist.

However, the same Levenshtein distance might be evaluated without the full distance matrix M computation. Each of the prefixes, \(S_1[i]\) and \(S_2[j]\), distance computation is based solely on the values of the current i-th and previous (i-1)-th rows of the matrix, and thus, the values in the other rows can be simply discarded. It provides an ability to significantly reduce the space used by the algorithm to O(2 x |S_2|).

The pseudo-code of the Wagner-Fischer (two matrix rows) algorithm is listed below:

This algorithm declares two vectors \(V_old\) and \(V_new\), denoted as e_d and e_i in the specific Python code sample, discussed below. The vector \(V_old\) is initialized with the count of characters that must be inserted into the empty \(S_1\) string ( # ), transforming it into the string \(S_2\)

In this case, there’s no deletions count for the prefixes A and D, since it’s impossible to transform A into D, via a series of deletions from \(S_1\). Since then, the count of deletions is the minimal edit distance \(M[1][1]\) = \(0\), between the equal prefixes A, previously obtained:

Likewise, the distances between the next prefix D of \(S_1\) and all corresponding prefixes A,D,V,…,B,S of \(S_2\), in the 2nd row, are computed, based on the minimal distances between other prefixes in the 1st row of \(M\), previously obtained. 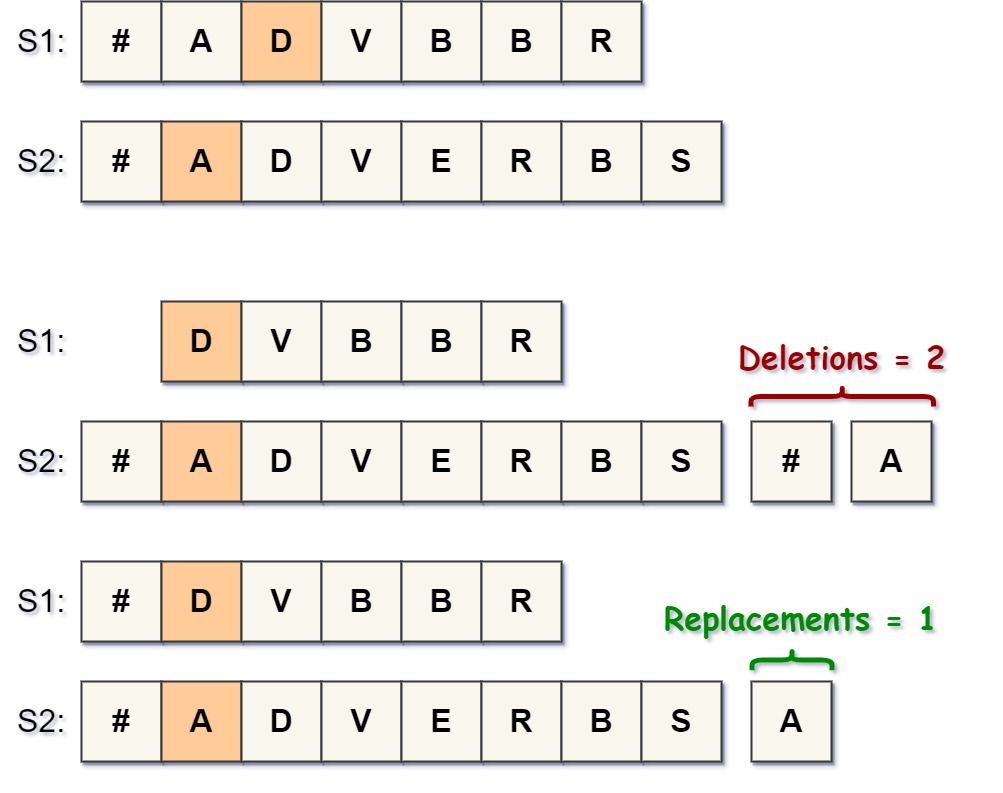 Here, the count of characters deleted from \(S_1\) is also the minimal distance \(M[2][0]\) between prefixes (D, #), in the previous 1st row, because 2-deletions of the #, A characters must be done in both cases. As well, the replacements count is equal to the minimal distance between (A, #), since the transformation of D into A relies on the previous A to ( # ) prefixes transformation. In this case, the replacements count is \(1\), since the only 1-character A has been deleted from \(S_1\) and inserted to \(S_2\), matching the D and A prefixes at the same positions in \(S_1\) and \(S_2\), correspondingly. Finally, there’s neither such the prefix D to A transformation via the insertion of characters to \(S_1\), nor deletions or replacements of characters are to be made in \(S_1\). That’s why, the insertions count for this transformation is \(0\): 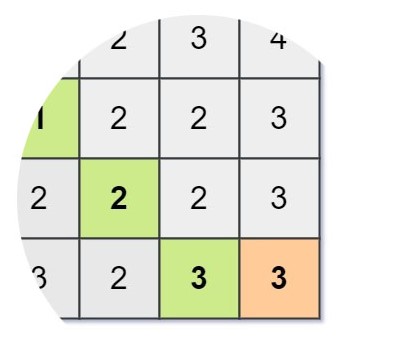 Finally, the Levenshtein distance of \(S_1\) and \(S_2\) can be evaluated without computing the full matrix \(M\), because the minimal distances from the \(i\)-character prefix of \(S_1\) and all \(j\)-character prefixes of \(S_2\), in each \(i\)-th row, are obtained, based on the values in the \((i-1)\)-th row of the matrix, only. The distance values in the other previous rows are not used for such computations, and thus, are simply discarded.

The Levenshtein Distance To The Similarity Score Conversion

There are several steps to the similarity \(S_L\) value, such as:

Here, the Levenshtein distance between \(S_1\) and \(S_2\) is normalized by using the classical min-max normalization formula. Finally, the largest Levenshtein distances \(\mathcalLev(S_1,S_2)\) correspond to the smallest similarity score \(S_L\), and vice versa.

A function, implementing the optimal Wagner-Fischer algorithm in Python 3, using NumPy, is listed below. The d_lev(s1,s2,c=[],dtype=np.uint32) function computes the Levenshtein minimal edit distance of two strings s1 and s2 of different lengths, len(s1) != len(s2). The deletion, insertion, and replacement costs are all equal to 1, (e.g.,  c = [1,1,1]), when the array of costs c is not defined:

The Sørensen’s index value is trivially computed as the count of equal characters, in the intersection of the s1 and s2 strings, divided by the size of the longest string.

Another fragment of code, listed below, implements the Hamming distance metric:

To evaluate the Hamming distance between strings s1 and s2 of different lengths, the smallest of the s1 and s2 lengths l_min and the difference in their lengths l_diff are obtained. Then, the longest strings, s1 or s2, is truncated to the length of the shortest one, such as that s1[:l_min] and s2[:l_min]. It applies a search to get the count of positions, at which the characters of s1 and s2 are not equal. The Hamming distance value is evaluated as the count of such positions, incremented by the l_diff value, and returned from the function.

Here are also a couple of code fragments, converting the Hamming and Levenshtein distances to the strings similarity score.

The Hamming distance is converted by normalizing its value to the interval \([0..1]\). A fragment of code, below, demonstrates such a computation:

The resultant similarity score is \(1.0\) if the strings s1 and s2 are identical. Otherwise, the Hamming distance d is divided by the largest of the len(s1) and len(s2) lengths, representing the distance in the interval of \([0..1]\). The strings, for which the distance value is the smallest, are the most similar. That’s why the normalized distance value is subtracted from \(1.0\) to obtain the correct similarity of the s1 and s2 strings.

The demo application’s code in Python3 and NumPy is listed below:

The function survey_metrics(s1,s2) computes and the Hamming and Levenshtein distances, along with the corresponding values of similarity score for two input strings s1 and s2:

Another survey(s1,s2) function generates the formatted output of distance and similarity score values computed for the s1 and s2 strings:

Finally, the demo(filename) function loads the array of strings from the strings.txt file and performs the computations for each pair of the adjacent strings in the array, providing the distances and similarity scores outputs:

The Wagner-Fischer algorithm, discussed in this article, provides an ability to effectively evaluate the Levenshtein distance and similarity of textual data. This algorithm computes the distance of two strings, which is already the Damerau-Levenshtein distance, aware of the adjacent character transpositions. Finally, the Wagner-Fischer algorithm is easy to be implemented in most programming languages, not only in Haskell or Python but also C++, Java, Node.js, etc.